Hexabromocyclododecane in herring gull eggs: Declining concentrations since the beginning of the 2000s

In eggs of herring gulls from the North Sea and the Baltic Sea only alpha-HBCD was detected in all samples whereas the concentrations of the two other diastereomers beta and gamma of technical HBCD were near or below the limit of quantification. At all three sampling sites HBCD levels were highest in 2000 and declined significantly thereafter.

Hexabromocyclododecane (HBCD) is a brominated flame retardant. Technical HBCD is a mixture of different diastereomers, each of which consists of a pair of enantiomers ((-)/(+)). The major component is gamma-HBCD which makes up for 75-89%, followed by beta-HBCD (10-13%) and alpha-HBCD (1-12%). HBCD is mainly used in polystyrene foams used for thermal insulation of buildings but it is also present in, e.g., housings of computers and TVs and back-coatings of textiles used in upholstery. HBCD is very effective and small amounts are sufficient to obtain the desired level of protection. Nevertheless, traces of HBCD are found in all environmental compartments today.

In the environment HBCD is persistent. It accumulates strongly in organisms and in the food web and is highly toxic to aquatic organisms. Because of these PBT-properties (Persistent, Bioaccumulative, Toxic) HBCD is classified as SVHC (substance of very high concern) under the REACh-Regulation. Furthermore, its inclusion in Annex 1 of the Stockholm Convention is discussed.

However, since no adequate alternatives exist, the use of HBCD is currently not restricted despite its unfavourable properties. In recent years, the manufacturers and processors of HBCD have initiated several programmes to reduce and control HBCD emissions (e.g., VECAP - Voluntary Emissions Control Action Programme and SECURE - Self Enforced Control of Use to Reduce Emissions).

To obtain an impression of the HBCD contamination of biota in German coastal waters, a retrospective monitoring was performed using herring gull egg pools from three sites at the North Sea and the Baltic Sea.

Of the three main diastereomers in technical HBCD only alpha-HBCD was detected in all egg samples whereas levels of beta- and gamma-HBCD were mostly below the LOQ. Levels of (-)-alpha-HBCD were slightly higher than those of (+)-alpha-HBCD in all samples.

Time trends were similar at all three sampling sites with peak concentrations around 2000 and declines thereafter.

Slightly higher HBCD contents were detected in gull eggs from the North Sea island Mellum, i.e. 2.1-66 ng/g lw (-)-alpha-HBCD and 1.7-40.8 ng/g lw (+)-alpha-HCBD. Again, concentrations peaked around 2000 and decreased afterwards. However, the decrease was somehow delayed and it was not before 2008 that 50% of the peak concentrations were reached. 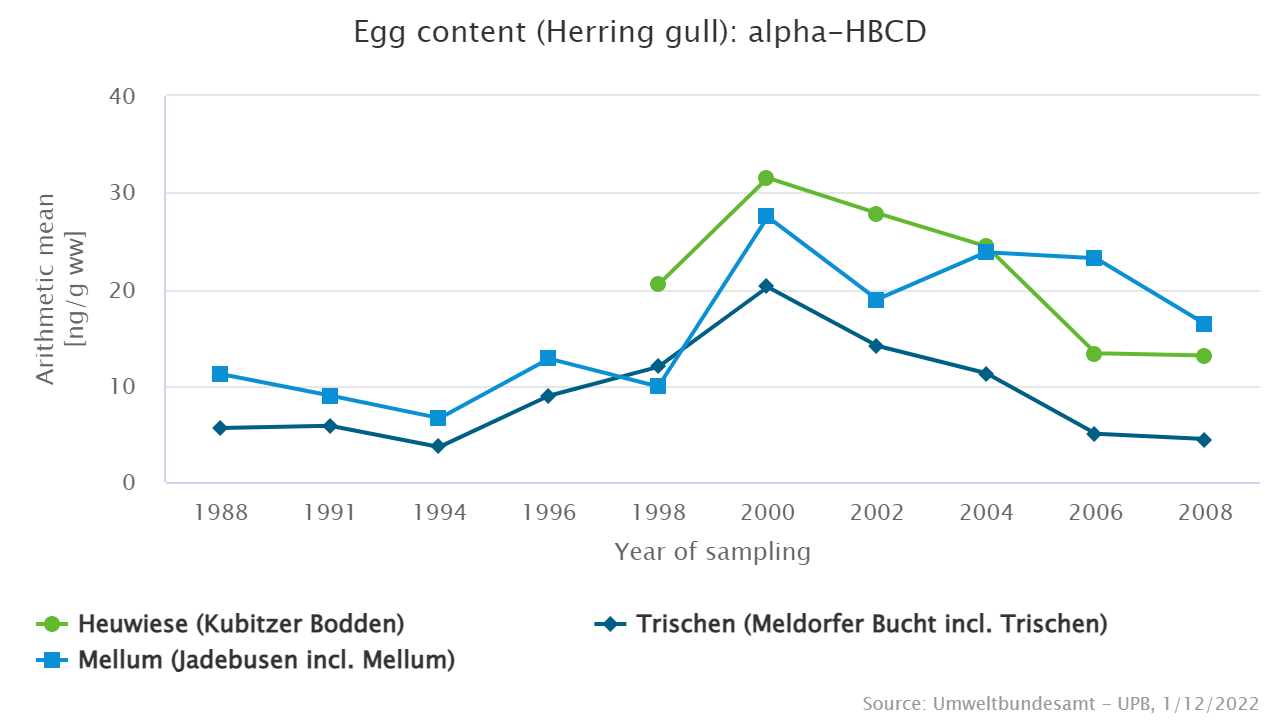 Significance of the findings

Even though gamma-HBCD is the major diastereomer in technical HBCD, the alpha-diastereomer dominates in herring gull eggs. These findings are in accordance with earlier studies. Three possible reasons are discussed in this context: (1) a better bioavailability of alpha-HBCD because of its higher water solubility, (2) a biotransformation of gamma- and beta-HBCD to alpha-HBCD, and (3) a rapid metabolisation of gamma- and beta-HBCD resulting in a dominance of the more stable alpha-diastereomer.

The observed decline in HBCD contamination of herring gull eggs at all three sampling sites suggests that the measures taken to reduce emissions have been effective and/or that HBCD consumption has decreased in recent years.