Perchlorate contamination of fruit and vegetables is a reoccurring problem. Thus, the German Environment Agency (UBA) started an investigation of different environmental matrices and precipitation water samples of the UBA monitoring network to measure perchlorate background exposure in 2013.

In none of the 24 analyzed samples of the six monitoring stations of the UBA air-monitoring network a perchlorate concentration over the limit of quantification of 0.1 µg/L could be detected. The samples were gathered from September until November of 2013.

Samples from the Environmental Specimen Bank

To investigate the background exposure to perchlorate in soil and plants, UBA used samples from the Environmental Specimen Bank (ESB).

The specimen types soil, beech leaves and one-year-old shoots of common spruce originated from five different sampling areas of the ESB. The areas are distributed over the whole of Germany and are categorized in three different ecosystems: agrarian, forestry and nearly natural terrestrial ecosystems.

Not all sampling areas are used for yearly sampling; thus, the investigated samples differ in years of sampling. In November 2013 the up to that point latest samples of the ESB-archive were used.

Concerning the soil samples, the organic layer and topsoil, as far as available, were investigated. The samples originated from the year 2010 (at the ESB routinely sampling of soil is done every four years).

Perchlorate could not be detected in most of the analyzed samples. Only in the organic layer of the Upper Bavarian Tertiary Upland and the Bavarian Forest National Park perchlorate concentrations of approximately 0.001 µg/g ww could be shown (see figure 1).

It is important to note, that in Bornhöved no organic layer could be sampled because the area is used as cultivated area. 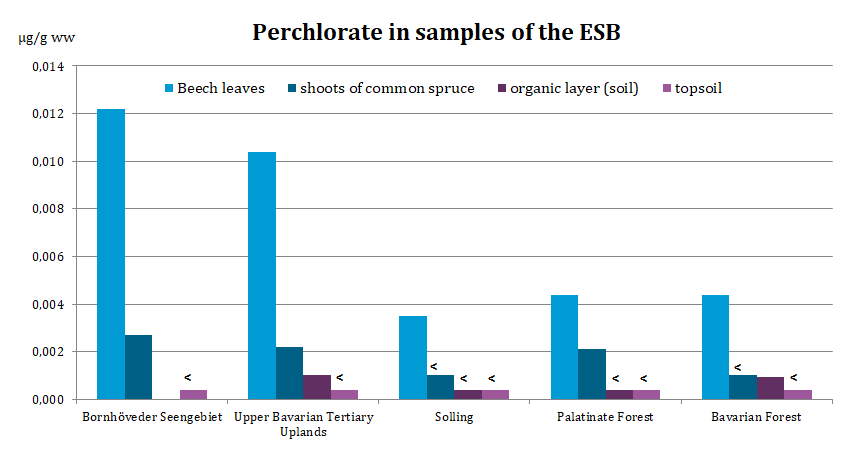 The used samples originated from the following sampling years:

As plant representative beech leaves and one-year-old shoots of common spruce were chosen. All analyzed values were under the reference values for food published by the Panel on Contaminants in the Food Chain (CONTAM) of the European Food Safety Authority (EFSA) in 2015 of 0.02 – 1.0 µg/g (mg/kg).

Interestingly beech leaves show far higher concentrations of perchlorate than common spruce or soil samples. It can be deduced, that perchlorate seems to enter the plants during the vegetation period. Additionally the leave samples of the agrarian ecosystems are exposed higher than samples of the other three ecosystems.

The results indicate that perchlorate exposure of produce is not directly linked to background exposure.